On Saturday, I watched a bunch of documentaries of missionaries who went into unreached tribes. What was so prominently displayed in these videos was the enslavement of the people before salvation and the FREEDOM through Christ after salvation…

Larry Brown, CEO of Ethnos360, says “It looks like the Sehoui – people, hungry, malnurished, even eating dirt while they are surrounded by abundant food sources; food that the spirits told them they can not eat. It looks like a Moi man hacking his wife to death after his son died, believing that the women killed the child through sorcery. It looks like Maria, who’s parents let her die from dehydration because the shaman said that she was already dead. It looks like this over and over and over again for millions of men and women around the world”

But enslavement to idolatry, hopelessness, fear, anger and deception is not something unique to tribal people. Paul writes a letter to the saints in Ephesus and tells them in Ephesians 2:1-4 – “You were dead in the trespasses and sins in which you once walked, following the course of this world, following the prince of the power of the air, the spirit that is now at work in the sons of disobedience— among whom we all once lived in the passions of our flesh, carrying out the desires of the body and the mind, and were by nature children of wrath, like the rest of mankind” The walk on the wrath-road may LOOK a little different in a tribal setting than it does in a Western setting, but for those who are not in Christ, it is still a matter of following the world, the prince of the air, and the passions of their flesh.

Freedom for all who believe

But then the verses of Ephesians 2 goes on in verses 4 through 7. Because of what Christ has done there is good news. Good news that is the same for both Westerners and Tribal people – that Christ came into the world to save those sinners who confess their sin and put their faith in His finished work on the cross (1 John 1:9) And behold, in an instant there is freedom from the penalty of sin and freedom from the power of sin!

After the gospel was proclaimed in these villages, it was beautiful to see the reaction of the village people as they realized the reality of forgiveness of their sins. In some of the tribes the people literally jumped up and down for joy and danced for hours. As the people in the Mouk tribe responded enthusiastically (which is an understatement to their response – “Ee-taow! Ee-taow!” – which means it is true, it is good, it is very TRUE! They grasped the amazing work of Christ that has freed them from the consequences of sins, from the wrath of God. They had inexpressible joy in their hearts for His gift!

And then how tribal people, as young believers, experienced the joy of the power to say “no” to sin and “yes” to righteousness. A young believer in the Taliabo tribe of Indonesia said that, when he was tempted to steal a banana when he was extremely hungry, he was able to say NO and walk away from sin. Why? Because sin was their previous master, that died and has no authoritative voice over them, they don’t have to listen anymore, they are no longer SLAVES to sin! (Rom 6:12-14)

If it wasn’t for this powerful gospel, that sets Westerners and Tribal people free, our endeavor to go to PNG would indeed be in vain… but it is not! Rom 1:16 – “I am not ashamed of the gospel, for it is the power of God unto salvation for EVERYONE who believes, to the Jews first, and also to the Greeks”

Believers in another tribe in PNG CELEBRATING for receiving the bible in their own language! 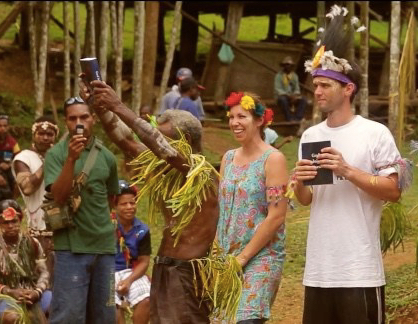 Video one is about the Moak people group. In addition to the testimony of the tribal people, it also points out two important questions you might have. 1) It points out why we learn the nDo language of the Maweroro people, and not just try to communicate in the trade language? 2) It also points out why we we teach chronologically through the bible, teaching on key portions of the Old Testament.

Video two is also a testimony of a tribe.

Another video worth watching is the Taliabo people’s story, that you can find on youtube. This is one of the first videos I’ve watched, years back, and these testimonies is just God displaying that He is a God mighty to save.

Ethnos360 has more testimonial videos on their website too.